While wired microphones still have their outstanding qualities that can’t be beaten by wireless microphones yet, nothing compares to the convenience of handy, versatile mics especially when it is demanded physical space during a performance or presentation of any sort. The best wireless microphones though are not that easy to find as there are many pros and cons that should be considered, and easily you will find a lot of tasty models – with temping prices – that are a complete disappointment. Check this list we did with 5 of the top notch, best wireless microphones available right now in the market as well as some tips for you to find the best wireless mic model and differentiate it from little players.

Shure released a combo with two wireless microphones and a receiver equally adapted for both of them work at the same time. The BLX288 model of mics has an operation range of 300 feet, this around 91 meters, so you can wander around quite far from the PF58 receiver. You can adjust in the receiver settings like gain control and will not require any other interface to improve it. The Shure mics require only two AA batteries to work, this is enough to keep you talking or singing for a long while, up to 14 hours!

The second Shure of our list is also great wireless mic.Its quite similar to the first model and the best option for people who just need one mic with wireless receiver. The settings and features of both models are quite similar, this one also has an option for adjustment of the gain control and only requires a pair of AA batteries. 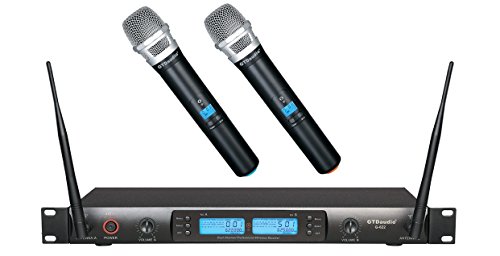 GTD made only one kind of frequency ranged wireless microphones but they did it with great quality and this set of two mics has many advantages compared to the Shure ones. The range of operation here is much wider (160 meters) and the way this mic works is quite dynamic as it will automatically scan the better frequency channel for you. Even the setup of the transmitter is deployed automatically by the receiver, matching it with the microphones automatically and up to starting work. 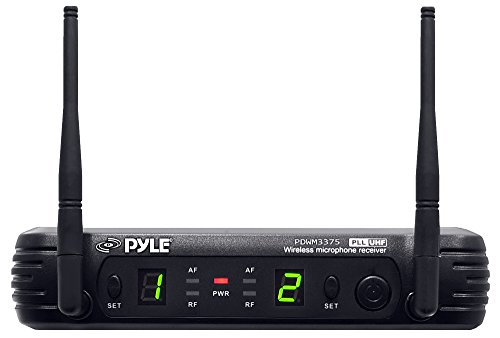 This PylePro is a more modest model when it comes to operation range, but it still works with the autonomy of our previous models providing great output and pick up of sound. PylePro developed a line that is quite focused on quality for capturing and transmitting sound wirelessly, that’s why they focused on lesser distances but made their cardioid capsules more potent. This mic will work only responding to minimum requiremenets of 55 dB otherwise it switch to the better channel available among 8 different options. 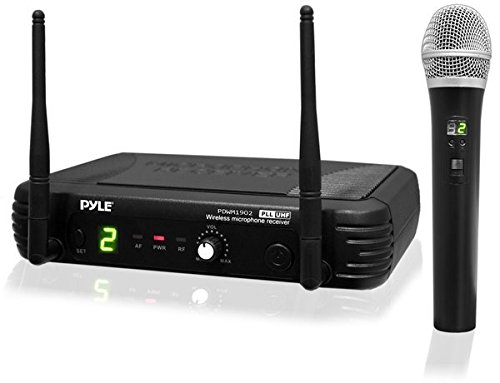 The last item of our list a singled version of the previous Pyle model. While the former is a set developed under the Pro series developed by Pyle, this one has a less boosted system since it works with only one receiver and mic, the selection of channels will happen manually through the SET function, but anything else this wireless microphone is just like the other model, works with

Differences between wireless and wired ones?

The differences here are not only about an obvious chord, on the other hand, they kind are. Standard microphones work with loss less data transmission, because they are wired and absolutely nothing will be lost while they are connected and working properly. Of course, what will be captured also depends on the potency and sensibility of the microphone, but the transmission via cable is still the most reliable one – and that’s why many artists still make use of wired microphones that are most of the time placed in a stand. Wireless microphones on the other hand will transmit data through radio signals, so there is always some loss of data, but that doesn’t mean all wireless microphone will be losing half of what is spoken. They have less cardioid capsules too, which are responsible for the sensibility, in general only a frontal or two side ones – all models on our list are frontal only. But they still can provide great quality of output especially if they work with great receivers, which is the key feature on focus for the selection of the models you have seen in this list. They are all as great as possible.

What makes a wireless mic one best?

While most of the wireless mic models is not too much sensible as mentioned before, working with fewer cardioid capsules than standard microphones, is the receivers that will make the difference. The more pick up frequencies available, always the better, because wireless microphones rely on radio signals so when you have plenty options, you have a versatile system to select the channels that will work better in the ambient where you are. Wireless microphones must have this ability to adapt to different ambient because they are not supposed to be deployed in the dream room forever where everything will work perfectly and everything is under an absolute control. Great receivers must be able to dodge between bad frequencies and put you in the best channel. Of course, considering this, is important that a wireless microphone also has a decent operation range. You will not want to work with a model that works fine for only 10 to 20 meters. Receivers that are adapted to work with the distances listed here in the review of the models we picked are the ideal ones to provide outstanding output of sound under the reasonable range of motion someone holding a mic will wander on. The longer the range, the bigger is the ratio of perfection on transmission and less data is lost.

What should be avoided ?

Avoid models that look so tasty because they are cheap, look just like any other but offer a much limited range of frequencies and operation. Decent wireless microphones sets must be at least up to 50 m of operation range and work with at least a range of 5 different channels – though is better to stick with numbers like 8 channels of our most demure model. The problem about wireless microphones beyond this kind of specification is that they will simply not adapt well to different situations. Some ambient s have more shadow (interference) than others and may need more options from where they could dig on a good transmission. The more limited is the ranges, less adaptability you will have.

Also keep a standard to only selection cardioid capsules. There are different kinds of pick ups of lesser quality that can make the input of sound quite average and disappointing.

What Our Reviews have to Say

As you can see there are different options for the same models depending on the desired number of microphones you wish to work with, and the differences of range are dictating here the prices, including the range of frequencies. Once again, remember that the more options of adaptability, the better, but if you have a more regular standard of ambient s where you will want to use the wireless microphone, you can save some money and go with the less potent options.